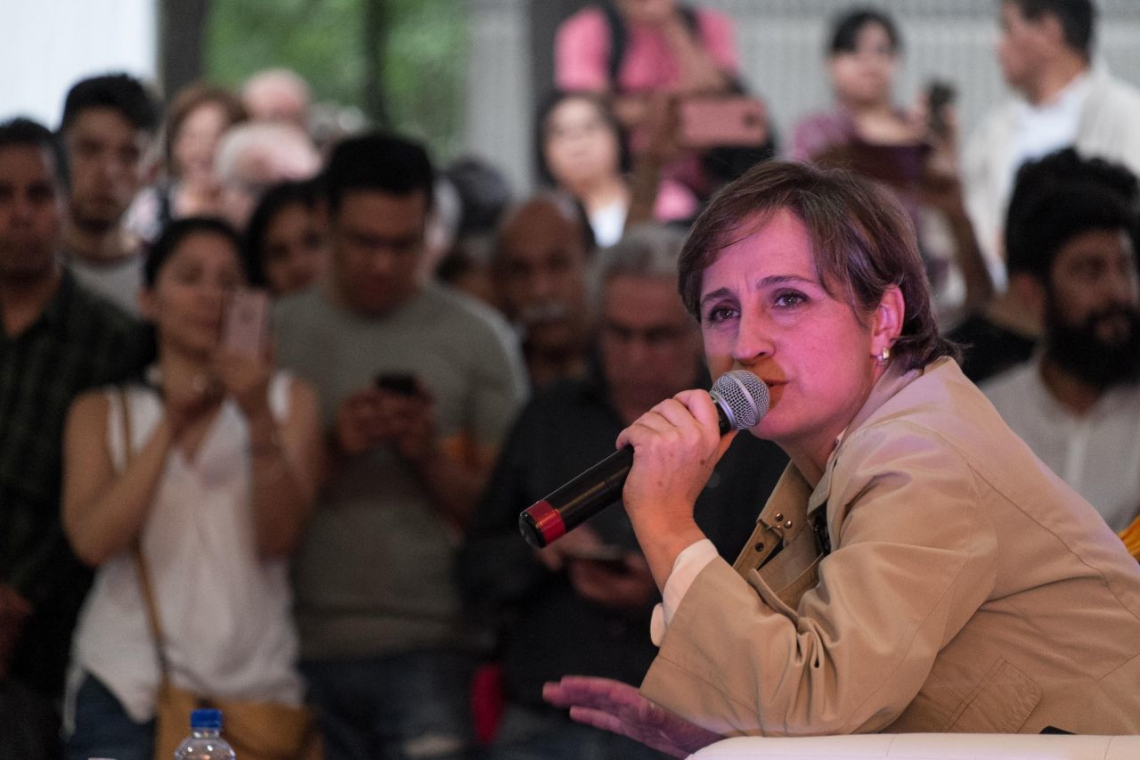 Geneva, November 17, 2020 (PEC) The situation of journalists in Mexico is particularly dire. The Press Emblem Campaign (PEC) has decided to honor the memory of all murdered, threatened, and censored journalists in this country by awarding its annual Prize for the Protection of Journalists to the Mexican journalist Carmen Aristegui who has demonstrated exceptional courage in the defense of press freedom and the fight against impunity.

Over the past five years, Mexico has been one of the most dangerous countries in the world for journalists with 65 killed, an average of 13 per year. Since President Andres Lopez Obrador took office in December 2018, at least 15 of them have been assassinated, including nine since the start of this year. The Mexican media are also currently severely affected by Covid-19, which has caused the deaths of dozens of journalists in recent months.

“We pay tribute to the courage of Mexican journalists. The 2020 PEC Prize goes to Carmen Aristegui for her fight against impunity in Mexico and the corruption that plagues any effective fight to end the killing of journalists,” said Blaise Lempen, PEC Secretary-General. “Receiving the PEC award is a great honor and represents a strong incentive to continue our work in Mexico. I greatly appreciate this award which draws attention to the situation of journalists in Mexico. The most brutal form of silencing a journalist is to assassinate him. When a journalist is killed, the right of the people to be informed is also assassinated,” Carmen Aristegui said from Mexico. Carmen Aristegui was unable to travel to Geneva due to the second wave of the pandemic. The award ceremony was already scheduled for March. The documentary film dedicated to Carmen Aristegui "Silence Radio" was supposed to be shown there as a preview, but due to measures taken to fight the coronavirus, it will not be shown to Swiss audiences until next year.

The documentary Silence Radio, by Juliana Fanjul (Switzerland / Mexico, 2019, Akka Films) follows in the footsteps of Carmen Aristegui, dismissed in 2015 from the radio station that had employed her for years after revealing a corruption scandal. Followed by more than 18 million listeners, Carmen Aristegui continues her work of investigation and awareness with Aristegui en Vivo, her new daily radio show broadcast on the internet, with the first audience in radio according to the measurement of Nielsen, and her own news website Aristegui Noticias. Carmen is widely regarded as one of Mexico's leading journalists and opinion leaders. “When Carmen Aristegui was censored in March 2015, I felt that I was deprived (me and thousands of Mexican listeners) of my right to free and independent information. In a desire not to become an accomplice through my own silence, I decided to direct Silence Radio, ”Juliana Fanjul, the film's director, told PEC. Carmen Aristegui received in 2015 the Gabriel Garcia Marquez Prize for her research on “Casa Blanca”, in 2016 the Knight Award from the International Center for Journalists (ICJ, United States) and in 2017 was chosen by Fortune magazine among the 50 most influential people in the world for his journalistic work in Mexico. The NGO Press Emblem Campaign (PEC), created in 2004 in Geneva with consultative status at the United Nations, sensitizes the international community to the urgency of strengthening the safety of journalists. Since 2009, it has awarded its prize to an individual or an organization who worked for the protection of journalists and press freedom on the ground.