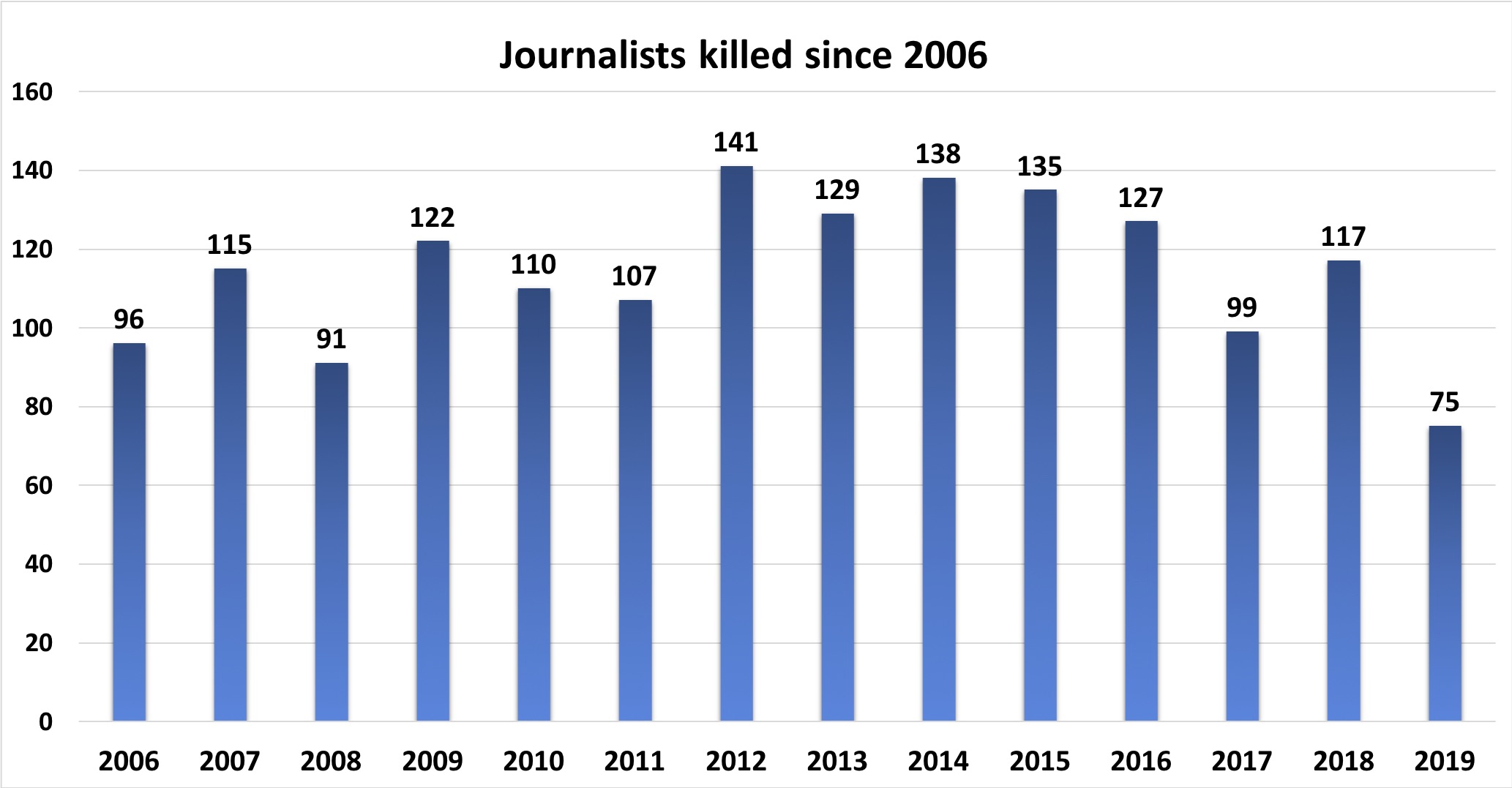 Geneva December 13, 2019 (PEC) – In its annual report, the Press Emblem Campaign (PEC) announced that since the beginning of the year 75 journalists were killed in 26 countries, a decrease of 36 percent in media casualties compared to the previous year. It is the lowest figure since 2006.

PEC Secretary-General noted that this decrease is encouraging, but much more needs to be done. Less media workers are killed, but many others have been injured, detained, threatened, attacked, media outlets were destroyed.

"Conflicts in the Middle East have decreased in intensity but the wave of sometimes violent demonstrations in several countries around the world is a serious source of concern for the safety of journalists", he added.

Mexico, with 13 fatalities (- 5 compared to the previous year), and Afghanistan (- 9) with 8 media workers killed remain the most dangerous countries worldwide for the third year in a row. Pakistan has also registered 8 casualties this year (+ 3).

After these countries, the most dangerous were Syria with 6 killed (- 5), then Honduras (5 killed). Honduras is the country with the greatest increase this year (+ 5).

One media worker was killed in each of the following countries: Bangladesh, Chad, Chili, the Democratic Republic of the Congo, Ghana, Kenya, Libya, Nigeria, Northern Ireland (UK), South Africa, Ukraine, Yemen. In the Maldives, it was revealed that one journalist missing since 2014 was in fact assassinated.

By region, Asia represents the most affected region with 27 killed, immediately followed by Latin America with 26 killed, then Africa 10 killed, the Middle East 10, and Europe 2 (1 in Northern Ireland and 1 in Ukraine).

The numbers in Latin America are very worrying. It represents more than the third of the casualties. In the Middle East, the decrease is significant (- 14), also in Europe (- 5, with no journalist killed in Russia).

The PEC strongly condemns all those heinous attacks and calls upon the authorities to bring all the perpetrators to justice. There must be no impunity.

The Press Emblem Campaign (PEC) celebrated 15 years in 2019.  PEC figures are higher than those of other organizations because the PEC considers all media workers killed, whether it is work-related or not. In fact, it is difficult to prove that a crime is related or not to the work of the journalist without independent and full inquiries which are often lacking in conflict zones and in countries shaken by violence.