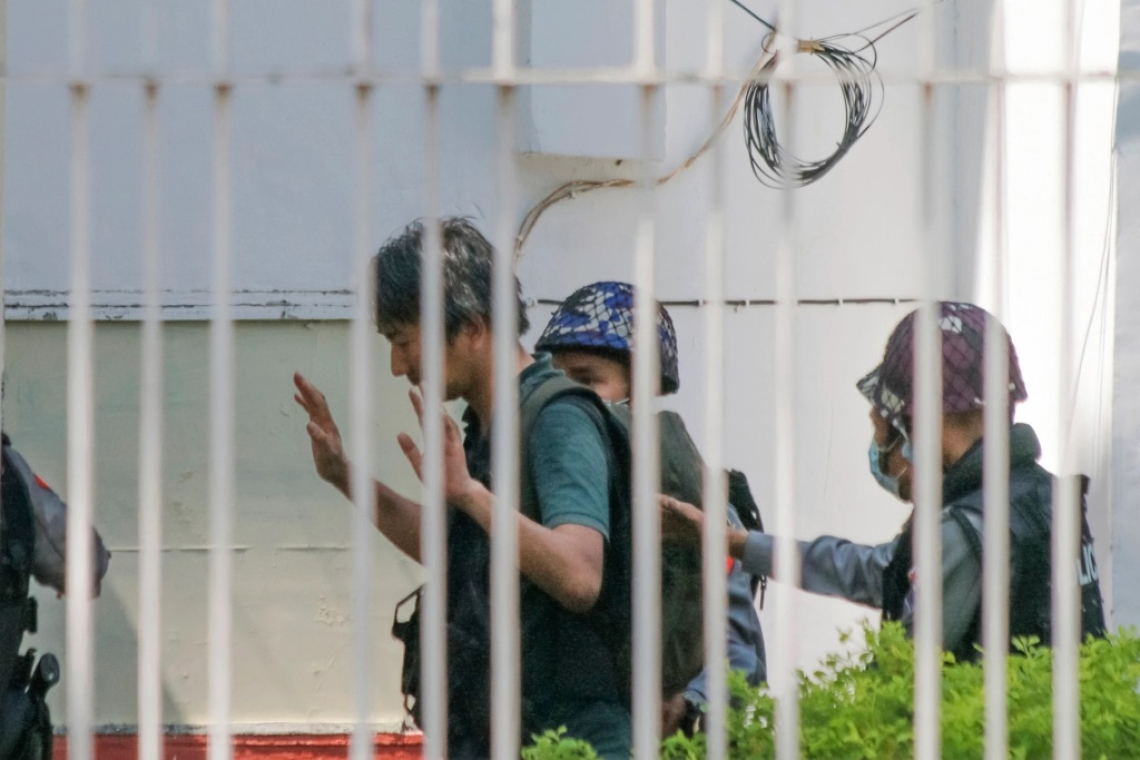 The number of journalists jailed around the world set another record in 2021. Invoking new tech and security laws, repressive regimes from Asia to Europe to Africa cracked down harshly on the independent press. A CPJ special report by Editorial Director Arlene Getz.

It’s been an especially bleak year for defenders of press freedom. CPJ’s 2021 prison census found that the number of reporters jailed for their work hit a new global record of 293, up from a revised total of 280 in 2020. At least 24 journalists were killed because of their coverage so far this year; 18 others died in circumstances too murky to determine whether they were specific targets.

China remains the world’s worst jailer of journalists for the third year in a row, with 50 behind bars. Myanmar soared to the second slot after the media crackdown that followed its February 1 military coup. Egypt, Vietnam, and Belarus, respectively, rounded out the top five.

The reasons for the relentless climb in the numbers of detained journalists – this is the sixth consecutive year that CPJ’s census has recorded at least 250 incarcerated – differ between countries. But all reflect a stark trend: a growing intolerance of independent reporting. Emboldened autocrats are increasingly ignoring due process and flouting international norms to keep themselves in power. In a world preoccupied with COVID-19 and trying to prioritize issues like climate change, repressive governments are clearly aware that public outrage at human rights abuses is blunted and democratic governments have less appetite for political or economic retaliation.

It’s true that some unexpected countries did buck the trend of putting more journalists in prison. Turkey, once the world’s worst jailer of journalists, is now ranked sixth in the CPJ census after releasing 20 prisoners in the last year. Eighteen remain. Saudi Arabia’s release of 10 prisoners – it’s holding 14 after no new journalists were recorded on the 2021 census – means it is no longer among the five biggest offenders.

However, it would be naïve to see lower prisoner numbers as a sign of a change of heart toward the press. As CPJ has noted, Turkey’s crackdown after a failed coup attempt in 2016 effectively eradicated the country’s mainstream media and prompted many journalists to leave the profession. Turkey’s prison count is also declining as the government allows more journalists out on parole to await trial or appeal outcomes.

In Saudi Arabia, the intimidatory effect of Jamal Khashoggi’s horrific murder and dismemberment in 2018, along with several new detentions in 2019, is likely to have silenced many journalists more effectively than any fresh wave of arrests. In addition, authoritarian leaders are increasingly finding more sophisticated ways to block independent reporters and outlets – notably internet shutdowns and increased surveillance through high-tech spyware – than keeping them behind bars.

China’s relentless incarceration of journalists is not new. However, this is the first time journalists held in Hong Kong are found on CPJ’s annual census – a result of the implementation of the draconian 2020 National Security Law imposed in response to the city’s historic pro-democracy protests.

Eight Hong Kong media figures, including Jimmy Lai, founder of Apple Daily and Next Digital and CPJ’s 2021 Gwen Ifill Press Freedom Awardee, were jailed in a stark blow to the city’s already embattled independent press. Some could face life in prison.

On mainland China, others face a litany of vague Orwellian charges. Freelance video journalist Zhang Zhan, arrested in May 2020 for her critical coverage of China’s response to the COVID-19 pandemic, is serving four years for “picking quarrels and stirring up trouble” – a charge often used to target peaceful critics of the ruling Chinese Communist Party. Others are accused of being “two-faced,” a phrase without legal basis but suggesting surreptitious opposition to the Communist Party and often used against Xinjiang’s Uighur journalists.

China also targeted non-journalists for tenuous associations with the media, arresting 11 people for allegedly sending material to The Epoch Times, a media company affiliated with the spiritual group Falun Gong. The 11 are not listed in the CPJ census because The Epoch Times said they were not reporters, but their detention is an ominous indicator of China’s efforts to stifle media discourse.

Myanmar, which had no journalists in jail as of December 1, 2020, saw the military’s post-coup repression leave 26 journalists in custody 12 months later. The situation, however, is even more dire than this total suggests. Many journalists, among them American Danny Fenster, were released ahead of the census count after months in prison and CPJ’s research suggests there may be others in custody yet to be identified as reporters. In addition, an unknown number of reporters have gone underground or into exile – their departure a significant blow to gains made by independent media under the ousted elected government.

Egypt came in behind Myanmar as the world’s third-worst jailer of journalists, with 25 in custody for 2021. Although a decrease from last year, the ongoing detentions are emblematic of the Abdel Fattah el-Sisi government’s often blatant disregard of its country’s own laws.

Egyptian authorities regularly work around legislation limiting prisoners’ pretrial detention to two years by filing additional charges to extend that period. In other cases, they attach conditions to the releases of those who’ve completed their sentences.

Egyptian photojournalist and CPJ International Press Freedom Awardee Mahmoud Abou Zeid, known as Shawkan, for example, has spent every night in police custody since he was freed from Tora prison on March 4, 2019. Released  under “police observation,” he must report to a police station every evening for the next five years. Every evening so far, police order him to spend the night in the station’s cells. Shawkan is also prohibited from managing his financial assets and property for five years.

Ethiopian journalist Dessu Dulla, who works at the Oromia News Network, talks on his mobile phone outside their studios in Addis Ababa, Ethiopia, May 25, 2021. Dulla was arrested on November 18, 2021. (Reuters/Tiksa Negeri)

Numerous journalists have been arrested in the country since the start of the civil war between the federal government forces and forces led by the Tigray People’s Liberation Front (TPLF) a year ago; nine reporters were still in custody on December 1. Six were arrested in November as the conflict escalated and the government imposed harsh emergency laws. CPJ documented multiple other press freedom violations throughout the year.

Katsiaryna Andreyeva (R) and Daria Chultsova stand inside a defendants’ cage during a court hearing in Minsk, Belarus, on February 9, 2021. The two Belarusian journalists, who work for the Polish television channel Belsat, were convicted of coordinating mass protests in 2020 by broadcasting live reports. (Reuters/Stringer)

Belarus leader Aleksandr Lukashenko, meanwhile, showed how little he cared about public opinion and how much he cared about staying in power by the extreme measures taken to arrest journalist Raman Pratasevich: the outrageous diversion of a civilian RyanAir flight to take Pratasevich off the plane.

Belarus now has at least19 journalists behind bars, up from 10 last year and the highest since CPJ started keeping data on imprisoned journalists in 1992.

One of those in custody is Aliaksandr Ivulin, a reporter for independent sports news site Tribuna. While Ivulin is facing up to four years in prison on charges of violating public order, one of his fans was sentenced to 14 days in detention for wearing a club shirt with the number 25 to a match at Ivulin’s local football club. The reason? That’s the number worn by Ivulin when he played for the club.

In this grim year for free expression, that kind of intolerance leaves little room for optimism that the number of jailed journalists will stop setting records anytime soon.

Other findings of note:

CPJ recorded 19 journalists murdered in retaliation for their work as of December 1, 2021, compared with 22 in all of 2020. Three more were killed this year while reporting from conflict zones, and two others were killed covering protests or street clashes that turned deadly.

Mexico remained the Western hemisphere’s deadliest country for reporters. Three journalists were murdered in direct retribution for their reporting; CPJ is investigating the other six killings to determine whether they were related to their journalism.

India has the highest number of journalists – four – confirmed to have been murdered in retaliation for their work. A fifth was killed while covering a protest.

Six journalists are listed on the prison census for Latin America: three in Cuba, two in Nicaragua, and one in Brazil. While a relatively low number, CPJ has found a disturbing decline in press freedom in the region.

At least 17 jailed journalists have been charged with cybercrimes. In the West African country of Benin, two are charged under the country’s broadly worded digital code, which is seen as a major challenge to press freedom by allowing criminal prosecution for anything published or distributed online.

No journalists were jailed in North America at the time of the census deadline. However, the U.S. Press Freedom Tracker, a partner of CPJ, recorded 56 arrests and detentions of journalists across the U.S. during 2021. Eighty-six percent occurred during protests. In Canada, two journalists arrested while covering land rights protest in northern British Columbia spent three nights in custody before a court ordered their conditional release.

The prison census accounts only for journalists in government custody and does not include those who have disappeared or are held captive by non-state actors. These cases are classified as “missing” or “abducted.”

CPJ defines journalists as people who cover the news or comment on public affairs in any media, including print, photographs, radio, television, and online. In its annual prison census, CPJ includes only those journalists who it has confirmed have been imprisoned in relation to their work.

CPJ’s list is a snapshot of those incarcerated at 12:01 a.m. on December 1, 2021. It does not include the many journalists imprisoned and released throughout the year; accounts of those cases can be found at http://cpj.org. Journalists remain on CPJ’s list until the organization determines with reasonable certainty that they have been released or have died in custody.

Arlene Getz is editorial director of the Committee to Protect Journalists. Now based in New York, she has reported from Africa, Europe, Asia, and the Middle East as a foreign correspondent, editor, and editorial executive for Newsweek. Prior to joining CPJ, she spent nine years at Reuters, where she she was the editor in charge of the service’s global Commentary section.