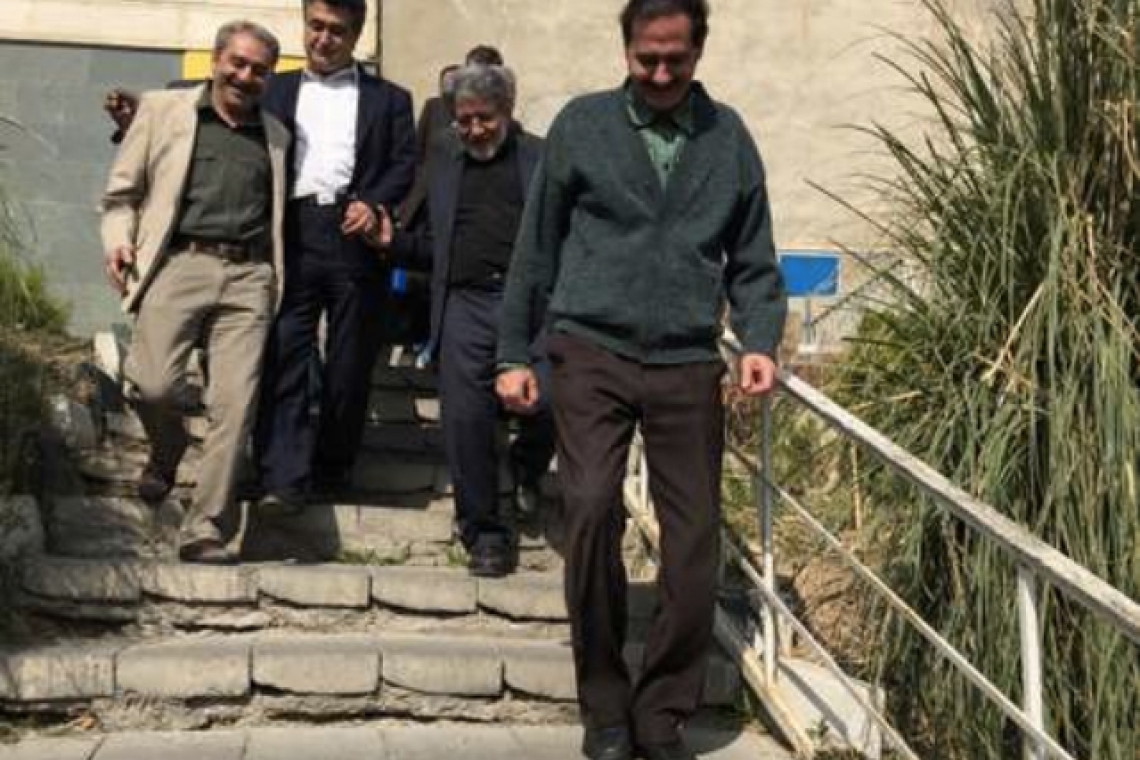 September 5, 2017—prominent journalist Alireza Rajaee had his right eye and part of his jaw removed due to cancer which was left untreated when he was in prison in Iran between 2011 and 2015, his wife told the Center for Human Rights in Iran (CHRI).

“When he was in Evin Prison, the authorities did not allow him to receive treatment,” said Leila Liaghat. “Every time he went to the prison clinic, they sent him back to Ward 350 after only getting a shot or some pills. If he had been allowed to go to the hospital and get some tests, his illness could have been diagnosed and treated and he would not have lost an eye and part of his face.”

CHRI’s review of dozens of cases shows that Rajaee’s case is not an isolated one, but rather one among many in a pattern of systematic state denial of full and timely medical care to prisoners.

CHRI calls on President Hassan Rouhani to immediately initiate an investigation into Rajaee’s case to determine responsibility for his medical condition. CHRI also asks the Iranian parliament to establish an independent committee to investigate the pattern of denial of medical care to prisoners by Iran’s judicial and prison authorities.

“Denying proper medical treatment to its prisoners is causing grave and irreparable harm to these individuals and Iran’s authorities need to be held accountable for these egregious violations of universal standards of prisoner treatment,” Ghaemi said.

A board member of the Iranian Association of Journalists, Rajaee has served as a political editor for a number of reformist and moderate newspapers including Jame’eh, Tus, Neshat and Asr-e Azadegan. He currently heads Gam-e-No publishing company, with titles on liberal political, religious and social topics.

Rajaee was arrested on April 24, 2011 and sentenced to four years in prison and banned from civil and political activities for five years on charges of “membership in the Nationalist-Religious Alliance,” “acting against national security,” and “propaganda against the state.” He was released on October 26, 2015.

Speaking to CHRI on September 3, 2017, Rajaee’s wife said he underwent a 14-hour operation on August 27 to remove his cancerous tissue.

“He was completely healthy when he was arrested,” Liaghat said. “He had no problems. But now he has lost an eye and part of his face because he was denied hospital treatment when he was in prison. Look at his pictures when he was arrested and after he was freed. It’s obvious that there’s an inflammation under his right eye.”

In response to a reporter’s question about Rajaee’s cancer, Judiciary Spokesman Gholam-Hossein Mohseni-Ejei said on September 3: “[Rajaee] was freed from prison about two years ago. After the completion of his sentence he caught cancer. Many people in the country get cancer… When he was in prison he had no signs of illness. I looked at his prison file and saw he went to the clinic once for a cold and another time he was checked by an outside doctor for dental issues… Now, two years after he was freed, he has caught cancer and we are sad he lost an eye. But all these sensational things said about him are not going to help him and all they do is disturb public opinion… His illness has nothing to do with his imprisonment and there is no indication in his file he had cancer in prison. It happened two years after he was freed.”

In a similar case, the young physicist Omid Kokabee lost a kidney to cancer after being left untreated in Iran’s Evin Prison despite requests by Kokabee and his family for years for treatment.

Liaghat, who is living in France with their two children to escape harassment by Iran’s Islamic Revolutionary Guard Corps (IRGC), added: “When Alireza’s father died in April 2014, he was not allowed to attend his funeral service. After that, his cellmates told me that he always complained about pain in his right eye and jaw. He would go to the Evin Prison clinic but the doctor would say he was not suffering from any particular illness…

“One night a doctor, who worked at the Baghiatollah Hospital in Tehran, came to Evin Prison. After seeing Alireza, the doctor yelled at the head physician at the clinic and told him that the injections he was giving Alireza were useless and he needed urgent hospitalization. But the physician did not allow it. He was surely acting on the orders of the IRGC Intelligence Organization. They wanted to get rid of Alireza. My sense was that they wanted to make sure he died a slow death in prison.”

Rajaee’s wife continued: “In prison his illness advanced to such an extent that it was only after he completed his term and got out that we noticed how bad it was. He got an MRI and he was told he has sinus cancer under his eye socket. He underwent six rounds of chemotherapy and four sessions of laser therapy and radiation therapy. We thought he had been cured but in December 2016 MRI and CT scans showed the cancer had come back and spread to his jaw and roof of his mouth and under his right eye.”

“In prison [Rajaee] would always say he had pain in his face and jaw. At the prison clinic they told him it was a toothache and sent him away with painkillers. A doctor said he needed to be treated outside prison. But [the authorities] didn’t allow it and eventually he got cancer and lost an eye,” Maleki tweeted on August 30, 2017.

Rajaee’s brother, Gholamreza, told Etemad newspaper on September 4, 2017 that when Alireza was in prison he had been prescribed hospital treatment on five occasions “but unfortunately they were rejected.”

Leila Liaghat told CHRI that after her husband was arrested in April 2011 he was held in solitary confinement for 64 days in Evin Prison’s Ward 2-A under the control of the IRGC. A year and a half later, Rajaee was granted a three-day furlough during which he saw a dentist for his severe jaw pain.

“The dentist said he could not perform any major treatment in three or four days other than to do a temporary root canal. There was no time for getting treatment and he was returned to prison.”

Rajaee was elected to the Iranian parliament in 1999 but after a “recount” ordered by the conservative Guardian Council, his seat was given to Gholamali Haddad Adel, whose daughter is married to Supreme Leader Ali Khamenei’s son, Mojtaba Khamenei.

“For too long Iran’s judicial and prison authorities have violated its own laws and State Prison Regulations that require proper medical treatment for prisoners,” said Ghaemi. “It is time for Rouhani, the enforcer of Iran’s constitution, to address these violations.”