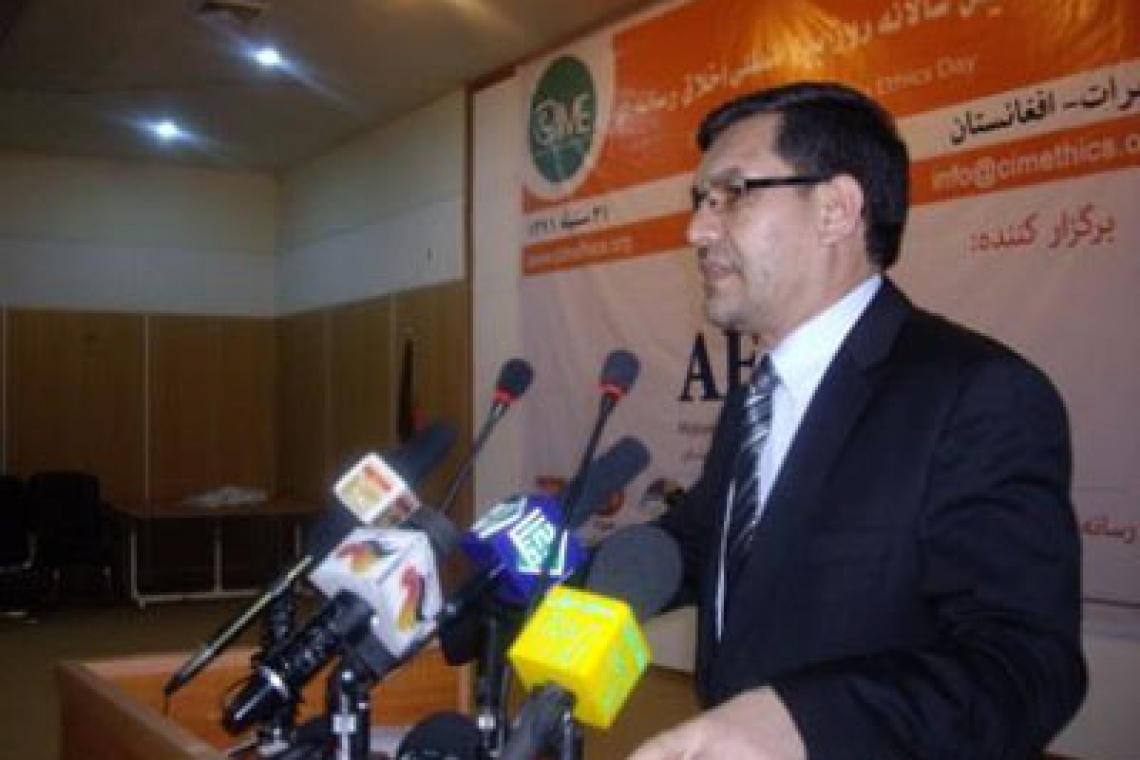 An annual gathering to mark the International Media Ethics Day (IMED) was held in western province of Herat on Sept 21 with participation of Afghanistan Deputy Information and Culture Minister, Din Mohammad Mobarez Rashedi, and more than 100 journalists and university professors from across the country.

This gathering, which was organized and arranged by the Afghanistan Journalist Center (AFJC) with collaboration of Center for International Media Ethics (CIME), was aimed at discussing and codifying the need for media ethics in Afghanistan. Participants delivered different fruitful speeches regarding the issue.

Ahmad Quraishi, Director of AFJC and CIME Ambassador to Afghanistan, delivered a welcoming speech and he also emphasized on the need for the codification of media ethics in Afghanistan. Quraishi insisted on active participation of the officials from the media outlets and all journalists.

Quraishi said: “This is big weakness of the media organizations as well as the Ministry of Information and Culture that with having ten years of experience of the freedom of speech in Afghanistan still they haven’t been able to set up regulations for media ethics, which could be acceptable for all media,” he added that lack of the rules and regulations for the media ethics has caused the media related people to ignore it or pay less attention to media ethics and even some media outlets to violated it in some part of the country.

Speaking on the occasion, Director of the Afghan Media Watch, Siddiqullah Tawhidi, delivered an article titled “Investigating challenges and lack of biding by media ethics in Afghanistan” in which he said that codifying media ethics was vital and the organization that he is representing would fully support the enforcement of regulations for media ethics.

Tawhidi said that last year a number of organizations like InterNews, Nai, Pajhwok Afghan News Agency and a number of other foundations selected 19 points of the media ethics from nine different countries, which a similar draft was also recommended by the South Asia Free Media Association (SAFMA); however a consensus is yet to be reached.

He also said that currently the media development is supposed to abide by media rules and code of ethics while violation of the codes can cause several problems; he believes “That following the rules can protect media people from several challenges and can also help journalists to work according to the standards and fight the criticism of their audiences,”

Meanwhile Director of the independent Killid Group, Najiba Ayubi, also focused on the role of media ethics and said the main reason behind the success of some media outlets are their commitment to the principles of ethics and dissatisfaction of audience from a number of the media organizations clearly shows disobeying from the ethics.

Adila Kabiri, another participant of the gathering and a professor at the faculty of journalism at Herat University presented an article under the title of “The need for ethics in online media”, which she emphasized on the importance of the issue.

She said that keeping in mind the development and comprehensiveness of online media and the increasingly numbers of its audience on the daily bases, there is a need for more consideration for the media ethics in the online media, too.

Another professor Syed Najib Rahman Hadid also said there is need for ethics of media and sought serious attention of media people and organizations in this regard.

Deputy Minister Rashedi said that his ministry has supported the increase of media outlets in the country, which meant that the government is committed to its pledges about democracy and freedom of press.

Rashidi said since it was time to seriously increase focus on media ethics, his ministry was ready to play its role in setting up media ethic regulations.

According to AFJC official , several media outlets including Killid Group in Kabul, Hewad TV Channel in Kandahar and Radio Dunya in Kapisa have supported the gathering to mark the International Media Ethics Day.

It was declared in the gathering that a draft of media ethics will be prepared over the course of the coming year with close collaboration with different media outlets of the country as well as the Afghan Ministry of Information and Culture.