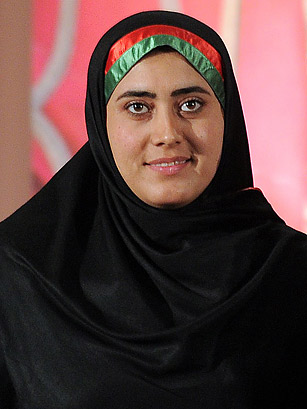 Maryam Durani, the manager of Mirman Radio of Kandahar makes it to Time Magazine’s 2012 “The 100 Most Influential People in the World”.

Praising her achievements, Time Magazine writes that as manager of Radio Mirman, Mrs. Durani has focused on women issues in her station in Kandahar, and by showing “extraordinary bravery” she has also been fighting for women’s rights in the region in her role as Kandahar provincial council member.

The international magazine further writes, “Inevitably, she is an investable target for the Taliban, who believe in women’s limited role in the society.”

According to Time’s, Mrs. Durani, to date, has survived several attacks.

Maryam Durani, 27, in addition to running Mirman Radio, being a provincial council member of Kandahar, also leads the non-government organization of Khadija Kobra that works for the women’s rights.

This annual award is given to ten women—who have worked hard in defending the women’s rights and improving the women situation in their societies—from all across the world.

The list that is now being published once a year includes100 individuals who have been the most influential in that year.

Maria Bashir, the chief investigator of Herat province and Saad Mohseni, the founder and executive director of Moby Group were the two Afghan citizens whose names were published among the 100 most influential people in the world in 2011.