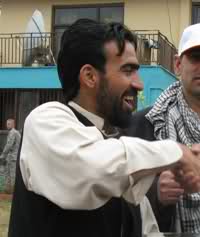 Local reporter of Internews-funded Salam Watandar radio network in the southeastern province of Khost has been set free by the US military after a day in detention.

Mali Khan Yaqubi was taken in custody on Saturday morning from his home by the US forces and was released Sunday 10 am after a day of interrogations.

Yaqubi said he was questioned about links to the Haqqani militant group which is very active in the southeast of Afghanistan and attacks foreign and Afghan forces there.

He said American troops raided his home in Sabari district, broke the door of the house and blindfolded him with his three brothers.

“They behaved too cruelly when raided our home. They took us to their military base thought they could not find anything during their search of our home,” said Yaqubi.

He also lamented the general treatment of the US military during interrogation process. He was set free after the military found him innocent, Yaqubi said, adding that three of his brothers were still in the US custody in a place not known to him.

Mali Khan, 29, is covering the Southeast for Salam Watandar network which is the biggest network of local radios in Afghanistan. He had recently also joined Pajhwok Afghan News.

Masood Fariwar, managing editor of Salam Watandar, said the US military, by detaining journalists without any evidences about their suspicions was illegal and was a threat to freedom of media.

“The American military first detains somebody, and then they find that the intelligence they got were wrong,” said Fariwar.

The US military has frequently detained journalists for having suspecions about their links to militant groups. Aljazeera reporters in Ghazni and Kandahar were detained in similar raid of their houses in Sunbala this year by the American forces and were later released as innocent.

Probe Into The Shooting Of Foreign Journalists Launched