KABUL, Afghanistan: The Afghanistan Journalists Center is saddened to learn that the Associated Press photographer, was killed and an AP reporter, was wounded on Friday when an Afghan policeman opened fire while they were sitting in their car in South Eastern province of Khost.

AFJC condemn the brutal attack against the journalist, calling it an act against freedom of press.

We extend our condolences to the victim’s family and wishing the wounded reporter an immediate recovery.

Anja Niedringhaus, 48, an internationally acclaimed German photographer, was killed instantly, according to an AP Television News freelancer who witnessed the shooting.

Kathy Gannon, the AP correspondent who for many years was the news organization's Afghanistan bureau chief and more recently was a senior writer for the region, was shot twice and is receiving medical attention. She was described as being in stable condition and talking to medical personnel.

According to the German daily, thelocal, She started her career as a freelance photographer for a local newspaper in her hometown of Höxter, North Rhine-Westphalia, at the age of 16.

After finishing high school, she went on to study German literature, philosophy, and journalism in Göttingen, according to her website.

She went on to work for the European Pressphoto Agency (EPA) as a chief photographer until 2001 where she covered the conflict in the former Yugoslavia. She was also based for several years in Sarajevo and in Moscow.

In 2002 Niedringhaus joined the AP as a staff photographer based in Geneva, Switzerland, which remained her base.

She covered most of the world’s conflicts including Israel, Palestine, Iraq, Afghanistan and Pakistan and had been injured several times.

On her first day in Sarajevo, Niedringhaus was hit by a sniper’s bullet.

And in 1997, her foot was crushed and broken in three places by a police car while she was covering demonstrations in Belgrade.

In 1998 in Kosovo, Niedringhaus was blown out of a car by a grenade and in Albania in 1999 she was one of a group of journalists mistakenly bombed by Nato forces.

"Anja and Kathy together have spent years in Afghanistan covering the conflict and the people there. Anja was a vibrant, dynamic journalist well-loved for her insightful photographs, her warm heart and joy for life. We are heartbroken at her loss," said AP Executive Editor Kathleen Carroll, speaking in New York.

The two were traveling in a convoy of election workers delivering ballots from the center of Khost city to the outskirts, in Tani district. The convoy was protected by the Afghan National Army and Afghan police. They were in their own car with a freelancer and a driver.

According to the freelancer, they had arrived in the heavily guarded district compound shortly before the incident.

As they were sitting in the car waiting for the convoy to move, a unit commander named Naqibullah walked up to the car, yelled "Allahu Akbar" — God is Great — and opened fire on them in the back seat with his AK-47. He then surrendered to the other police and was arrested. 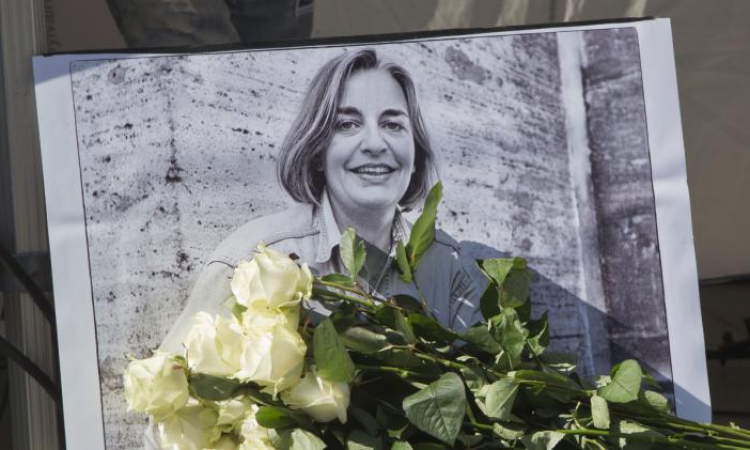 Probe Into The Shooting Of Foreign Journalists Launched