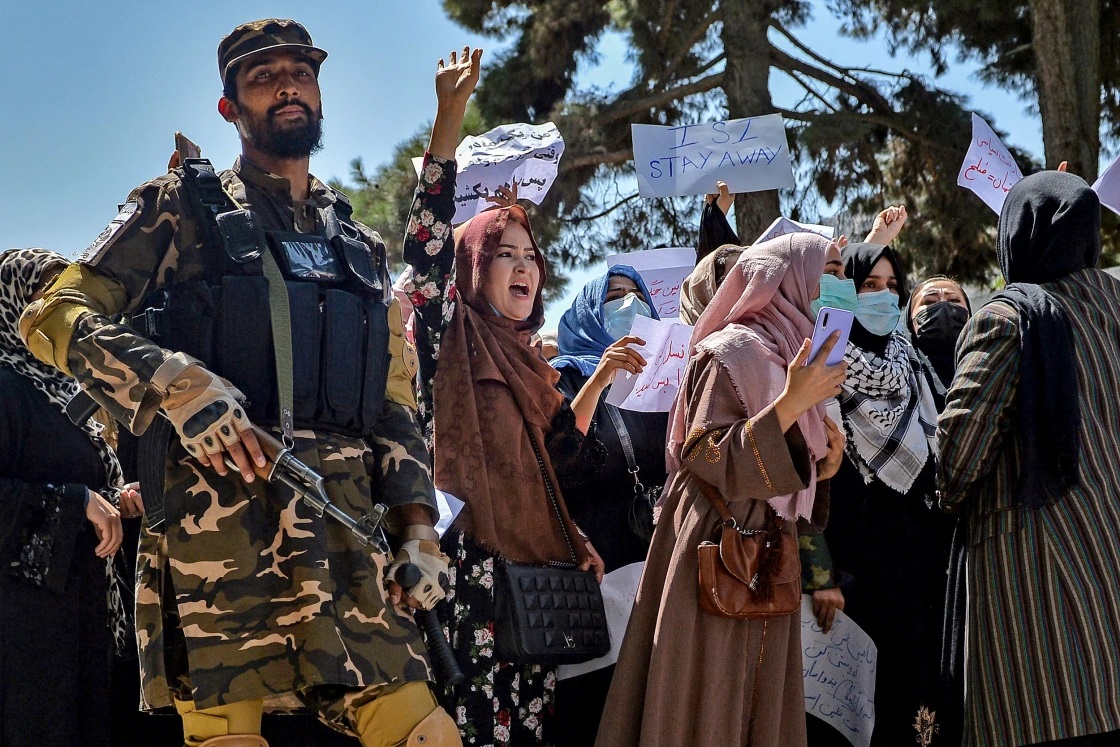 A Taliban fighter stands guard as Afghan women shout slogans during a protest rally near Pakistan's embassy in Kabul on Tuesday.Hoshang Hashimi / AFP via Getty Images

Kabul: The Afghanistan Journalists Center(AFJC) today strongly condemned the Taliban violence against journalists reporting on protests in Kabul and Mazar-e-Sharif cities and urged authorities to ensure that all those responsible are quickly identified and prosecuted.

On Tuesday, hundreds of Afghans, many of them women, protested in Kabul in defiance of Taliban rule, chanting slogans against neighboring Pakistan and expressing support for the ‘National Resistance Front’ in Panjshir province. The protesters were also chanting: “Freedom, Freedom.”

The protesters dispersed as the Taliban forces fired into the air. The Taliban arrested at least 14 journalists covering the demonstration and detained them for nearly three hours.

In one case a reporter had their microphone taken by fighters waving Kalashnikov rifles, who then beat him with it and broke it. In another case, a TolonNews TV cameraman was released after being detained for nearly three hours by the Taliban. His camera--with its footage of the protests he was covering--has been returned.

“We strongly condemn beating, threats of violence, and arresting of journalists trying covering the demonstrations in Kabul. It shows a complete disregard for the journalists’ critical role in documenting issues of public interest, “AFJC executive director Ahmad Quraishi said, “This is unacceptable, and should be met with international condemnation.”

“Taliban should publicly denounce such open and appalling press freedom violations and should ensure the safety of reporters covering protests.”

Despite the Taliban assurances, the militants' return to power is seen as a serious blow to Afghan media, which saw explosive growth after the first Taliban regime was toppled in 2001. A new AFJC report shows dozens of TV and radio outlets have stopped broadcasting or were seized by the Taliban and scores of journalists, media workers fled the country after the Taliban rapid takeover following the US troop withdrawal, fearful of violent reprisals from the militants.