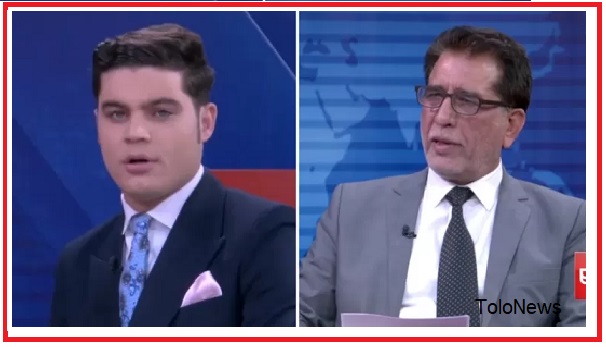 ToloNews presenter Bahram Aman(left) was detained along with news director Khpolwak Sapaia(right) and the channel legal advisor Naif Khaleeq in Kabul on March 17, 2022

The intelligence officials from the Taliban’s General Directorate of Intelligence (GDI) came at around 7:30 pm on Thursday at Tolonews office and detained presenter Bahram Aman along with news director Khpolwak Sapai and legal adviser Nafi Khaleeq, a journalist at the network told the AFJC. Of the three detainees, Khpolwak Sapai and Nafi Khaleeq were released within an hour after questioning, but Bahram Aman remains in custody, she said

Afghanistan Journalists Center condemns the raid of Tolonews office and calls for the immediate release of the detained journalist. Also, AFJC urges the Taliban government to fulfill its commitment to supporting press freedom by fully implementing the mass media and access to information laws, and creating a safe working environment for media, free of fears and intimidation.

Meanwhile, AFJC calls for the reinstatement of the Joint Media and Government Committee, established in the previous government to address security concerns and investigate violent cases against journalists.

During the Taliban’s first stint in power from 1996-2001, there were little Afghan media to speak of and the Taliban banned television, movies, and most other forms of entertainment as immoral.

Despite promising a softer version of their rule since taking power last year, a new AFJC report indicates that violence against journalists and media workers has doubled since the Taliban seized power in Afghanistan in mid-August of last year.

According to the AFJC’s annual report which was released on the occasion of “National Journalist Day” on March 16, at least 82 instances of violence mostly short-term detention by forces attributed to the Taliban.