Eight journalists, media workers killed in 2020 in Afghanistan, and most 'deliberately targeted' for their work, AFJC 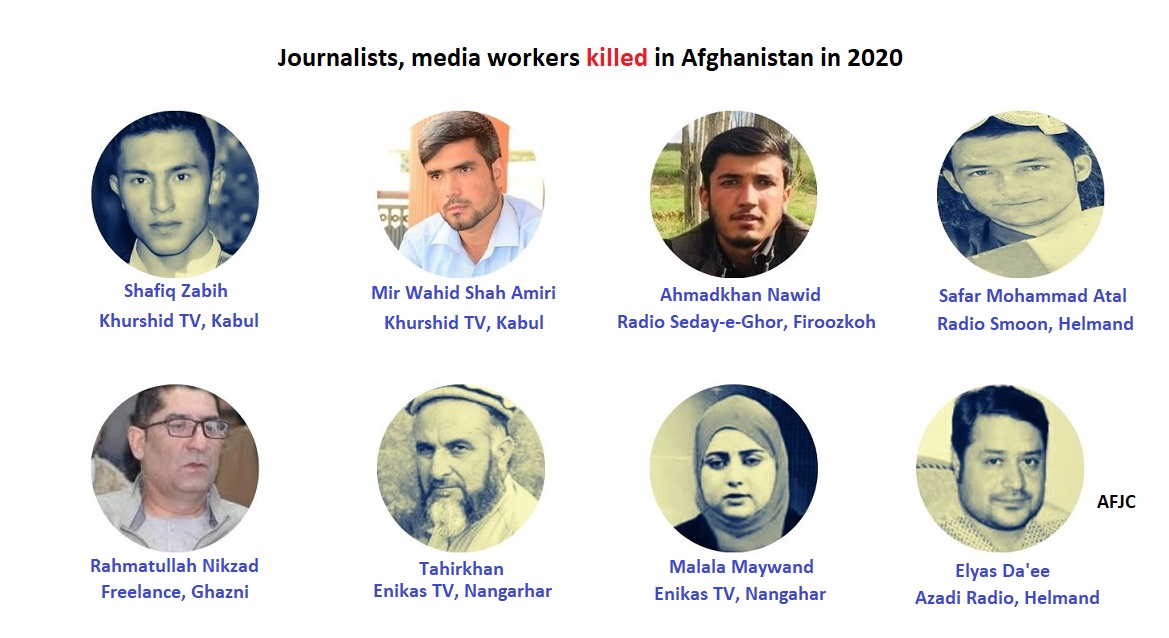 Kabul- The Afghanistan Journalists Center(AFJC) in its annual report on the state of press safety in Afghanistan in 2020 said that a sharp increase in the targeted killings of journalists led to an escalation of self-censorship in the country.

The report, published on 2 January, pointed to the high number of violations that affected the media freedoms in Afghanistan during 2020, where AFJC monitored and documented a total of 112 violations compared to 117 incidents including 7 killings that were monitored during 2019. The figure shows 6 out of eight killings in 2020, were targeted in which four of them claimed by Daesh(IS-K), two by unknown individuals, and the Taliban was accused in two cases.

Two key observations emerge from the statistics. Firstly, Afghanistan has never been as insecure for journalists as it was in 2020. Secondly, threats and targeted killings increased in the country even as peace talks between the government and the Taliban were ongoing. These attacks fueled journalists’ fear and self-censorship among journalists across the country.

Safar Mohammad Atal, presenter of Radio Samoon, in Lashkargha, Ahmad Khan Navid, a presenter of Radio Seday-e- Ghor in Firoozkoh, Mir wahid shah(Zamir) Amiri, a reporter, and Shafiq Zabih, a cameraman of Khorshid TV in Kabul, Elyas Da’ee, a reporter of Azadi Radio, Malala Maywand, a presenter at Enikas TV in Jalalabad and her driver Tahirkhan and Rahmatullah Nikzad, a freelance photographer in Ghazni province, lost their lives in 2020.

Moreover, two more incidents, including the attack on former TOLOnews presenter Yama Siawash and the death of Ariana News presenter Fardin Amini in a mysterious incident, happened last year, but their names not included in the AFJC list of victims of the media community.

Siawash was newly employed as a media advisor at the Central Bank at the time and his death has not yet been linked to media work. According to the ministry of interior, three suspects were arrested and the investigation is underway into the incident in collaboration with the National Directorate of Security(NDS). Also, the initial police investigation into the death of Fardin Amini did not prove that he had been killed.

In 2020, 19 journalists and media workers were injured in criminal cases as well as terrorist incidents in different provinces of the country, in which, Daesh(IS-K) was responsible for nine, unknown armed men, six, and the Taliban were being accused in 4 cases.

In total, the government; including authorities, employees, MPs, and security forces committed 49 violations against journalists, constituting 44% of the total incidents. while unknown armed groups and individuals were being accused in 29 incidents (26%), Taliban 25 incidents (22%), and Daesh(IS-K) in 9 incidents (8%).

“While the culture of impunity for the crimes against journalists continued in Afghanistan in 2020, most cases had not been investigated seriously, and the perpetrators are gone free and justice is not observed," Executive director of AFJC, Ahmad Quraishi said

“Press freedom and journalists’ safety must be pre-conditions for peace talks with the Taliban, Peace will only be sustainable in Afghanistan if it is built on full respect for human rights in particular press freedom,’ he added

According to AFJC’s data, 120 journalists and workers killed in Afghanistan since the collapse of the Taliban regime in 2001.

Media During the First Year of the IEA(Taliban) Rule