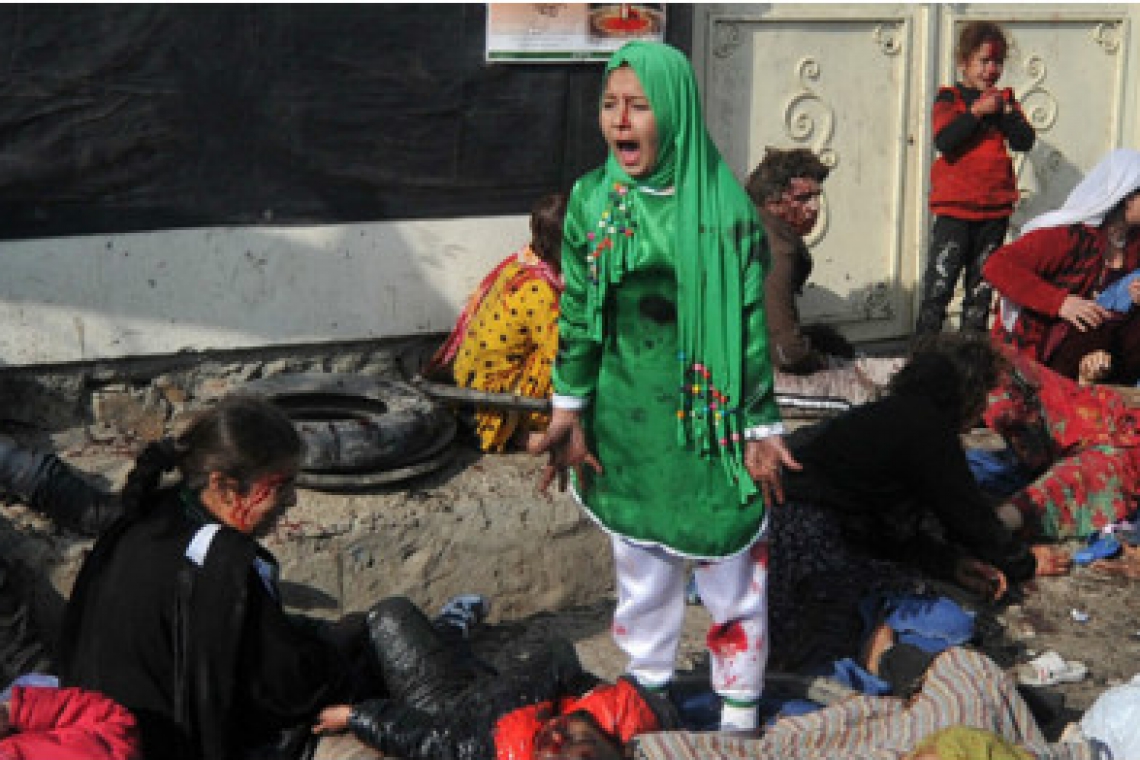 Columbia University has announced the 2012 Pulitzer Prize winners — and they include Massoud Hossaini, whose picture of a girl reacting to a suicide bombing took the title in the category of breaking news photography.

Tarana Akbari, 12, screams in fear moments after a suicide bomber detonated a bomb in a crowd at the Abul Fazel Shrine in Kabul on December 06, 2011. 'When I could stand up, I saw that everybody was around me on the ground, really bloody. I was really, really scared,' said the Tarana, whose name means 'melody' in English.

Out of 17 women and children from her family who went to a riverside shrine in Kabul that day to mark the Shiite holy day of Ashura, seven died including her seven-year-old brother Shoaib. More than 70 people lost their lives in all, and at least nine other members of Tarana's family were wounded.

The blasts has prompted fears that Afghanistan could see the sort of sectarian violence that has pitched Shiite against Sunni Muslims in Iraq and Pakistan. The attack was the deadliest strike on the capital in three years.

President Hamid Karzai said this was the first time insurgents had struck on such an important religious day. The Taliban condemned the attack, which some official viewed as sectarian. On the same day, a second bomber attacked in the northern city of Mazar-i-Sharif. Karzai said on December 11 that a total of 80 people were killed in both attacks. Published December 7, 2011

The Pulitzer for feature photography went to Craig F. Walker of the Denver Post for his story about an Iraq war veteran.

Massoud Hossaini was born in Kabul on December 10, 1981, during the occupation by the Soviet Union. His family fled Afghanistan to Iran when he was six-months old after his father, a supporter of the opposition to the occupation was arrested by the communist regime.

Hossaini finished high school in 1996 when the “Reformists Movement” was born in Iran, and he joined them as a political activist. As an activist, Hossaini realized that it was important to record events he was witnessing.

He chose photography. The dangers of of carrying a camera in the streets of Tehran forced Hossaini to travel to Masshad, a city he had traveled through when fleeing Afghanistan, to photograph Afghan refugees. After the 9/11 attacks and after the U.S. War on the Taliban, Hossaini returned to Afghanistan in the beginning of 2002 and joined Aina org. which was a cultural center funded by National Geographic photographer, Reza Deghati.

He furthered his photographic education under award-winning photographer Manoocher Deghati, and was soon being hired for professional assignments. In 2007, Hossaini joined the Agence France-Presse and has been covering the War on Terrorism since.