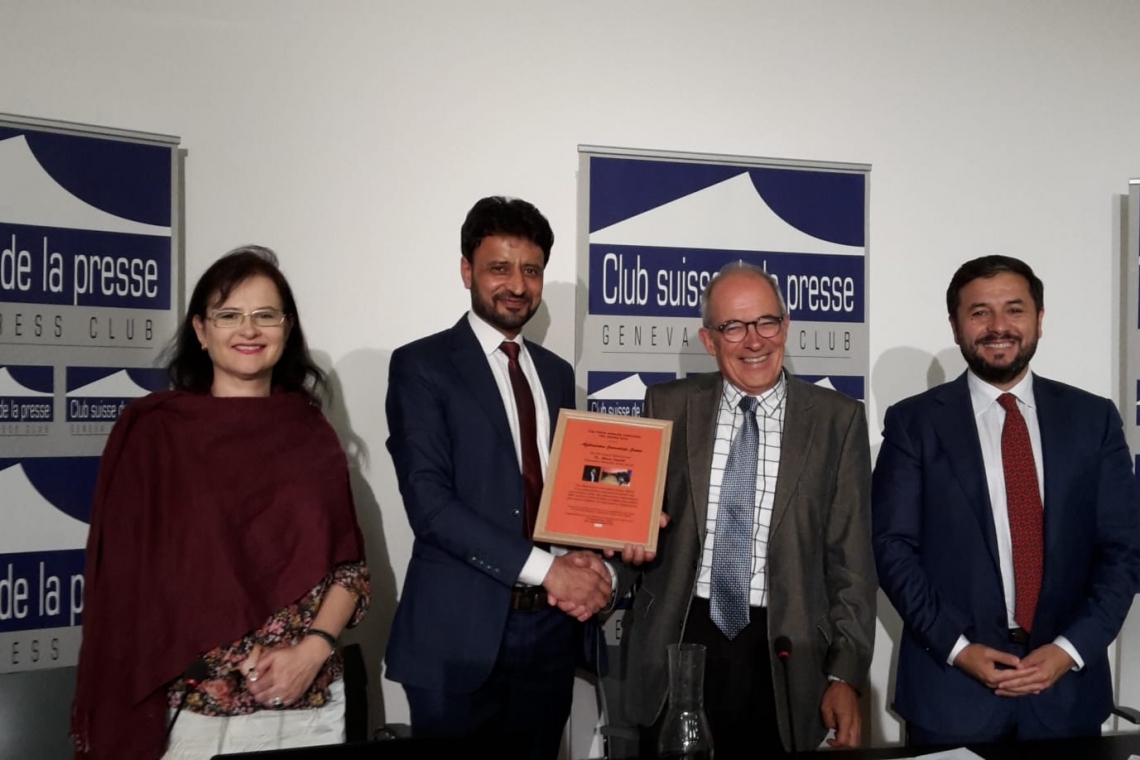 In a ceremony attended by senior journalists and diplomats, held at the Swiss Press Club in Geneva on Thursday, the organization said that Afghanistan Journalists Center (AFJC) has been selected to be honored with PEC annual award because of the active role it played on the ground for protection of journalists in Afghanistan.

"The Press Emblem Campaign, specialized for the protection of journalists in conflict zones, gives each year an award to a person or an organization that shows exceptional courage in fighting for freedom of the press and against impunity. This year the PEC committee has chosen the Afghanistan Journalists Center because it fully met the criteria. The AFJC works with little means to defend the rights of Afghan journalists and ensure freedom of the press in Afghanistan", the PEC Secretary-General Blaise Lempen said at a press conference in Geneva giving the prize to the Executive Director of AFJC Ahmad Quraishi.

"Afghanistan is at a crossroad. Freedom of the press is at stake. Terrorist groups are a constant threat to journalists, in particular, women journalists. The United Nations has adopted several resolutions on the safety of journalists. Afghanistan is a textbook case. Without freedom of the press, there is no democratic debate. The PEC therefore calls on the Afghan authorities to enhance the safety of journalists with the help of the international community,” stressed Lempen.

While receiving the award, the AFJC director Ahmad Quraishi said, “I am pleased and honored to receive this prestigious award and to join past recipients who I have long admired and respected.”

Quraishi further added, “This award is a token to my team for all the efforts they put in and I would like to dedicate it to the unsung heroes of journalism in Afghanistan, who are doing their utmost while endangering their lives every spur of the moment and to the journalists who sacrificed their lives for the cause of their profession.”

Speaking at the award ceremony, permanent representative of Afghanistan to the United Nations Office at Geneva, Nasir Andisha praised the Press Emblem Award for choosing AFJC to receive PEC 2019 award.

“I take this opportunity to salute all those who strived for freedom, especially our fellow journalists who are struggling during years of suffering and hardships for freedom of expression and public awareness and sacrificed their lives for the preservation of freedom of expression. We honor the memory of all freedom of expression fighters. I congratulate Mr. Ahmad Quraishi and AFJC for being selected for this important media award and thank the organisers of this event particularly Representative of the Swiss Federal Ministry of Foreign Affairs and Secretary General of PEC for their support.” He said

“We are at the front-line in the current battle against radicalism, fanaticism, prejudice, and terrorism which are all enemies of freedom of expression, tolerance and hormony. Our Afghan journalists, women and men have shown their committed to this noble cause by their blood and sweat. “ambassador Andiash added.