For Afghan Journalists, Election Brings a Sense of National Duty 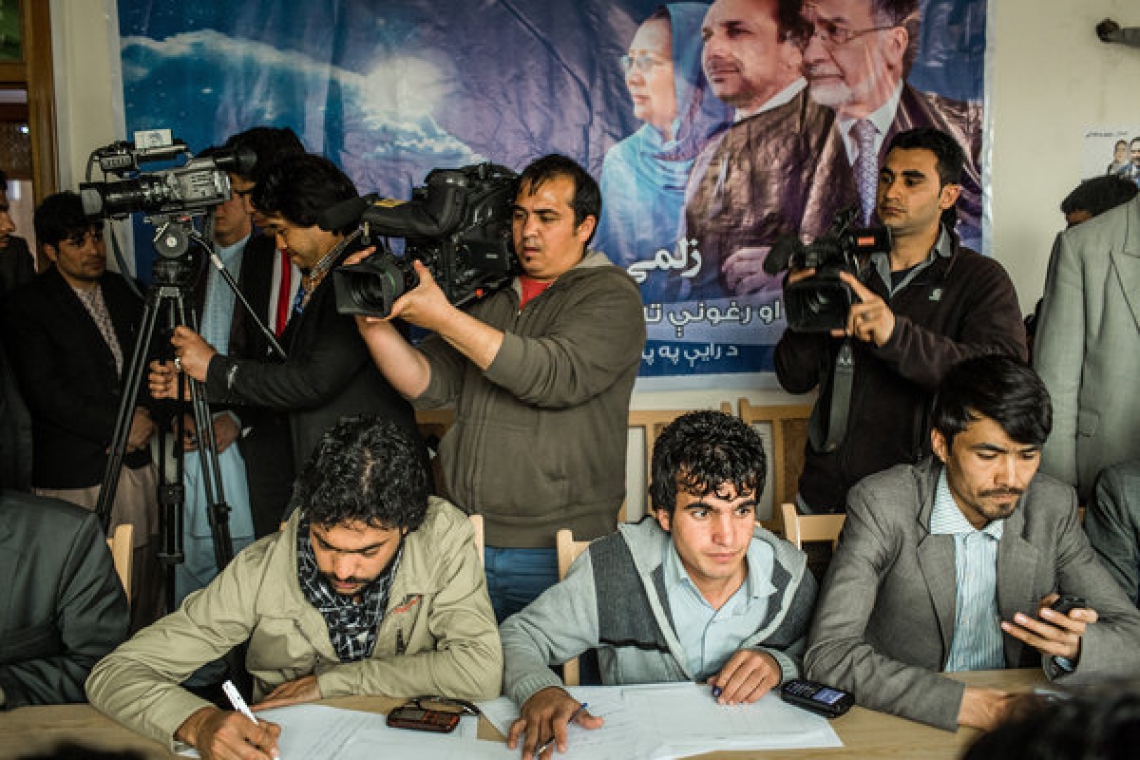 KABUL — As the raucous news outlets of Afghanistan — and there are hundreds of them — have come into their own in recent years, they have taken to criticizing government officials and institutions with an enthusiasm that borders on glee. And despite attempts by the powerful to rein in reporters, much of the news media has thrived with an occasionally adversarial approach.

So it is a measure of the urgency that Afghans are feeling about their presidential election that even the country’s gadfly class has eased up on the criticism and taken on more of a cheerleader role for the political process.

It started with exhaustive coverage in the months before the voting last Saturday, with television channels broadcasting a barrage of discussions, debates and commentaries, and heavily emphasizing the importance of a high turnout by voters.

On Election Day and the days since, the focus has stayed on the positive. And though there has been much to be upbeat about — record turnout, little violence and fewer complaints — at times the trouble spots seem to have been deliberately played down.

Interviews with journalists here have borne that out. Many expressed a shared sense of national responsibility at a critical moment in Afghanistan’s history. And though some were skeptical about the candidates themselves, they also said that championing the election was an expression of hope for the country’s future.

There is also a quiet recognition that the future of their own industry, which was significantly bolstered by the influx of Western aid in recent years, is at risk.

“The survival of the local media depends on the survival of this transition,” said Mujib Mashal, an Afghan journalist who writes for the American magazines Time and Harper’s. “There is patriotism and nationalism, but there is also a realization that if this transition does not happen peacefully, then the media has no hope for the sort of freedom” it is enjoying now.

The stakes were made clear a week and a half before the election, when Taliban gunmen killed nine people at the Serena Hotel, among them a member of the Kabul press corps, Sardar Ahmad, along with his wife and two of their young children.

The attack shocked journalists here, and they issued a collective statement saying they would boycott coverage of all Taliban statements and news releases for 15 days. In that light, the election, which the Taliban had vowed to disrupt, represented a direct repudiation of the militants’ goals and methods — as did the way the news media decided to cover it.

“There were two reasons that Afghan journalists covered the Taliban side with a lot of caution,” said Danish Karokhel, the head of Pajhwok Afghan News, the country’s largest independent news agency. “One was the boycott of Taliban news following the brutal killing of Sardar Ahmad and his wife and children. The other was a request from journalists’ rights organizations and unions a day before the election to avoid reporting negative news.”

On Election Day, the desire among some reporters for a high turnout was so strong, particularly in dangerous areas of the country where participation was very low in the 2009 vote, that they said they deliberately held back on reporting about violence that might dissuade potential voters.

A radio journalist in Logar Province described how after a major attack at a polling site, some outlets withheld the news until voting was nearly over.

“The Afghan journalists separately made a collective decision that they would not report negative news on the Election Day,” the journalist said. “Not only negative news, but anything which could undermine the election process.”

Reporters in two other eastern provinces, Khost and Paktia, said they had similar motivations. “I think it was obvious that on the Election Day, the media was not impartial,” said the reporter who works in Paktia and who, like the others, spoke on the condition of anonymity out of fear of Taliban reprisals. “The people are tired of war, and they cling to any string of hope. We gave them that string of hope with our positive coverage.”

Behind the journalists’ sense of a responsibility to keep the election on track was also a recognition that they could have an influence on events — a remarkable development in a country with little history of press freedom.

These days, the Afghan news media has a wider reach than ever, as televisions have become more common and as more people have access to the Internet on their phones. News shows crowd the airwaves with investigative reports, policy discussions and relatively progressive programming in a country where many people hold deeply conservative values.

That power has been amplified since the presidential elections of 2009, as politicians began to recognize the potential of local news media exposure. In the 2009 race, television stations could not get the two leading contenders to have a public debate. This time, there were three televised debates featuring the top candidates, and they were watched by more than 12 million people, according to TOLOnews, which broadcast the debates.

“The broad coverage of the election process for the last three months played an important role in bringing awareness to people and encouraging them to participate in the election,” said Mr. Karokhel of the news agency Pajhwok.

In the prelude to the voting, presidential candidates eschewed interviews with the international news media to focus instead on local outlets, which have greater sway over Afghan voters.

“During the campaign I have been entirely focused on Afghanistan,” Ashraf Ghani, one of the candidates, said in a recent interview.

Some journalists said their advocacy role during the election was as much about news judgment as about emotion. They argued that while violence and corruption continually plague Afghanistan, the chance for millions of Afghans to choose their own leadership was much rarer, and a more valuable focus for their reporting.

“In one of our meetings, we had a conversation: Are we picking the next five days or the next five years?” said Lotfullah Najafizada, the head of TOLOnews, the largest television network in the country. “Are we going to go against the process and show that this is going to be a mess, or encourage the people to go out and vote and highlight the importance of it?”

He added, “What is more important in Afghanistan, a bomb going off somewhere, which happens every day, or millions of people who go out and vote?” Source:The New York Times